“Digital marketing never stands still for long,” marketing expert Samuel Edwards commented in a piece authored for Inc. “Just when you get used to a certain set of technologies, trends, and patterns on which to build your online business, something new comes in to change the game and forces your tactics to evolve.” As you work toward your communication degree online, it’s important that continuous learning be one of your main goals.

With 2017 coming to an end, professionals with an interest in marketing and communication are starting to explore more deeply digital marketing trends for 2018. 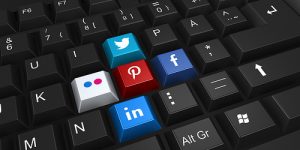 The advertising landscape is continually shifting. Today, brands are cultivating social media influencers, seen as “real people” instead of celebrities, for their marketing campaigns, according to Joseph Steinberg, chief executive officer of SecureMySocial, in an Inc. article.

Steinberg stated that consumers accept social media influencers as having a more “authentic” voice and message. This acceptance helps brands partnering with social media influencers to increase their sales and brand awareness, often at a lower cost than celebrity endorsements. For this reason, Brian D. Evans named influencer marketing as one of the five most important digital marketing trends worth acting on in the future in an article written for Inc.

The beauty industry has already embraced the trend, according to Kristina Rodulfo of Elle. In early 2017, cosmetics brand Revlon announced its work with vloggers Kandee Johnson, who has more than 3.8 million subscribers, and Gigi Gorgeous, who has more than 2.4 million YouTube subscribers, according to Allison Collins of WWD. In April, M.A.C revealed a capsule lipstick collection with colors selected by Instagram identities including Gabriel Zamora, Laura Lee, and Fleur Bell. Collins observed that the social media influencers these brands partner with help different audiences, often those outside the beauty sphere, connect with the company and its products.

Steinberg agreed that influencer marketing is a new concept that many businesses don’t understand how to use effectively or measure. However, Maurice Fadida, the founder of influencer agency Rebel Way Entertainment, told Steinberg that when used correctly, influencer marketing can make a brand feel authentic faster than traditional marketing methods can. As we enter 2018, this trend will only continue to grow.

Facebook and Instagram’s live video integration can help live video streaming become an important digital marketing trend, said Matthew Goulart, the founder of digital agency Ignite Digital, in Forbes. He anticipates more digital platforms will add similar live streaming capabilities in the future. As we enter 2018, this will definitely be a trend that continues.

Many 2017 live streaming videos showcased launches, allowing followers to see new items before other consumers. The McLaren-Honda Formula 1 team unveiled its latest car, the MCL32, through a live stream on the McLaren website in February. The event featured interviews with team drivers, engineers, and directors, giving fans insight into the vehicle and its role for the McLaren-Honda team.

Goulart predicted that live video streaming will become a key marketing trend, as it appeals to humans’ innate desire to experience someone else’s perspective in real time. He sees the technology’s potential for forming personal relationships with customers, which can increase customer loyalty and build brand awareness. An exclusivity also surrounds live streaming marketing, as only people online at the same time as the stream takes place can experience it in real time.

Snapchat geofilters are still developing, according to Priyanka Desai of Entrepreneur, but she believes they’ll become one of the great digital marketing trends as more businesses learn to use them effectively.

The Snapchat platform is also an effective way to reach Generation Y, according to Cassie Phillips of Social Media Explorer. More than 41 percent of Americans ages 18 to 34 use Snapchat on any given day, she said, citing Snapchat statistics published on Search Engine Watch. She added that this demographic represents about 25 percent of Americans with a total annual buying power of $200 billion.

In March 2017, Jameson Irish Whiskey launched two age-gated St. Patrick’s Day Snapchat geofilters for Canadian consumers. Until 5 p.m. on March 17, the filter featured a branded message stating “Forgot my green, this filter counts,” according to David Kirkpatrick of MarketingDive. After 5 p.m., the geofilter changed to simply “Cheers.” The Snapchat geofilters ran along with a social media and website #CheersYourJameson competition. Fans could win a vacation to celebrate St. Patrick’s Day in Dublin, Ireland, in 2018 by visiting the Jameson Canada website or following the brand on Facebook, Twitter, or Instagram.

Dunkin’ Donuts launched a summer-themed Snapchat geofilter in June 2017 available exclusively at its U.S. locations. The filter is a key part of Dunkin’ Donuts Summer of Coffee marketing campaign. Adults across the United States could win great prizes by using the geofilter and sending their photos to the dunkindonuts Snapchat. The summer promotion will see Dunkin’ Donuts give one lucky winner $10,000 and six fans free Dunkin’ Donuts coffee over the summer months.

Marketing professionals are responsible for staying informed about trends affecting the industry. There are a number of ways to do so, including studying for your communication degree online. Pursuing an advanced degree can help you prepare for continual shifts in the digital communication landscape.